If we were having coffee this weekend, it would have to be in my family room, on the couch, because I’m still on bedrest. The good news is that means Baby Boy and I have made it another four weeks to 32 weeks, which is WAY better than 28. The bad news is I’M STILL SITTING ON THE COUCH. It’s making me a little batty.

Truthfully, I feel a bit emotional. My husband would remind me now that I’ve always been an emotional person, and it’s true. But I feel all tangled up. I can be surrounded by my family but feel lonely at the same time, or be busy reading lots of books and blogging about them and feel bored at the same time. I feel proud of myself for resting for the sake of my baby and guilty at the same time that I’m not able to do more for my three girls or my wonderful husband. I’m thankful for the support of my employer and worried at the same time that I’ve caused them such a headache by being out of work. Everyone tells me “oh don’t feel guilty, don’t feel bad, you’re doing what you need to do.” And it’s true – I am. And I appreciate that feedback. I’m taking care of myself and my son (which, btw, after three girls still feels weird to say!). But that doesn’t negate the other emotions. I try not to dwell on them, but if there’s anything I’ve learned in lots of years of therapy it’s that ignoring them and pretending they don’t exist is worse: I need to feel them, acknowledge them, and move on. So, that’s what I’m trying to do.

I’d also mention two other things (aside from the fact that I haven’t actually HAD coffee in over a month…and I’ve just started wanting it in the last few days. weird). First, it would be that I’m also emotional about things outside the bedrest situation, particularly the current abuse scandal in the Catholic Church. I’ve cried about it at least once, spent lots of time thinking about it and reading about. What I haven’t done is pray about it, which I’m realizing as I type… I feel immeasurable sadness. Disappointment. Distrust. But at the same time I haven’t lost my faith in or love for the Church, and that sometimes feels hard to square. I’m not angry; a lot of people are and I get that. I think I feel mostly grief.

Lastly, I would tell you that today, August 19th, is mine and my husband’s twelfth wedding anniversary! We are celebrating in style, on the couch (ha!). There’s nothing out of the ordinary to mark the day except the constant knowledge that despite our youth and naivete about the world (though we wouldn’t have admitted it at the time), at the young ages of 21 and 22, twelve years ago today we made the best decision of our lives and married each other. Life is a crazy road, and we just commented this morning that we couldn’t have ever pictured where we are right now – but I am perpetually grateful that I have him by my side to navigate this crazy train. Love is a beautiful thing 🙂

(Weekend Coffee Share is hosted by Eclectic Alli – check out the other posts this weekend and add one of your own!)

So this is my first time participating in “Weekend Coffee Share,” hosted by Eclectic Alli, but I’ve been reading and enjoying Thomas Fenske‘s weekend shares for a while and started following the tag a few months ago. SO I thought now is a good time to join.

SO – if we were having coffee together this weekend, and I wish we were because it is LONELY in here, I would have to tell you that I am on bedrest with Baby #4. This isn’t my first rodeo (I did this with Baby #2 as well), but this time around I have a job outside the home and THREE kids, not one! Thankfully, I have the most wonderful husband in the world who takes great care of me and the kids! Also, a positive this time – I’m not also dealing with perinatal depression and anxiety this time around. It makes things much easier to handle!

I would assure you that despite being frustrated, I am doing well and so is Baby – as long as I continue to take the super crappy meds they gave me to stop contractions (every 8 hours I get basically knocked out for 2-3 hours) and I sit my bottom right here on my couch, the little guy should stay in there for quite a bit longer. Which he needs to do because I’m only 29 weeks today.

So WHAT am I doing with my time (besides sleeping each time I take a dose of meds)? When I was on bedrest five years ago I learned to knit, read a lot, and made a latch-hook rug. This time I’m betareading, hoping to work on some editing projects, catching up on some book reviews, reading books, and doing some professional development in the way of watching some Great Courses on English and the publishing industry. While also stalking Craigslist for a used Citi Mini Double Stroller or else HOW are we going to make it to the bus stop every day once this baby is born? I missed one for $90 the other day – an amazing price because these things retail for like $450 (eek!).

So, that’s my story! I have some amazing family, friends, and coworkers who have been checking in on me, dropping by food and the mail, and keeping me company. I’m trying to enjoy the quiet before the kids are back and there’s NO quiet – but I do miss the munchkins!

Enjoy your weekend, friends! I’ll be right here on my couch, keeping my little baby safe and secure! 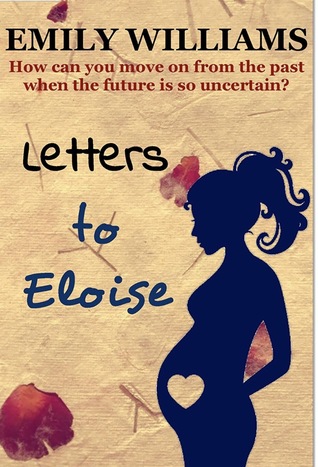 Receiving a hand written letter is something that always puts a smile on my face, no matter who the sender is.’ Flora Tierney.

When post-graduate student Flora falls unexpectedly pregnant during her final year studies she hits a huge predicament; continue a recent affair with her handsome but mysterious lecturer who dazzles her with love letters taken from the ancient tale of ‘Abelard and Heloise’, or chase after the past with her estranged first love?
But will either man be there to support her during the turmoil ahead?

‘Banish me, therefore, for ever from your heart’, Abelard to Heloise.

Letters to Eloise is the heart wrenching debut epistolary novel by Emily Williams; a love story of misunderstandings, loss, and betrayal but ultimately the incredible bond between mother and child.

Letters to Eloise is, hands-down, one of the best books I’ve read all year. Before rereading the Goodreads description I quoted above, I was thinking of how to describe the book and “heart-wrenching” was the first thing that came to mind. It was an intensely emotional read for me, I think because I have the great blessing of being a mother. In addition to the emotion, there are a few things that really struck me about the book:

All in all, this book was amazing. I highly recommend this one AND Emily’s next book, Rafferty Lincoln Loves…, which I had the great privilege to proofread for her. Check her out at http://emilywilliamsauthor.blogspot.com/.

*Many thanks to author Emily Williams for providing a free copy of the book in exchange for an honest review.